Home » Weight Loss Articles » Chili Pepper Can Help You Lose Weight
This post may contain affiliate links. I may be compensated if you make a purchase through a link on this page.

People who want or need to lose weight are constantly looking for new information on what they can do to improve and accelerate the process. While there are several exercise techniques that can be used to help people lose weight faster, there are also several dietary changes that can be made to help weight loss happen sooner. 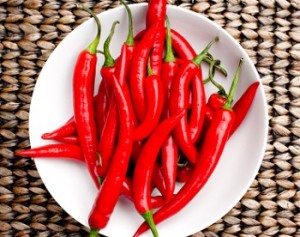 While there are many benefits to being on strict diets, as long as they include the nutrients and vitamins that the body needs, sometimes it can be hard to stick with these new boundaries.

There are, however, other ways that diets can be adjusted to help with weight loss, one of which is adding more chili peppers to the diet.

While it might sound a little far-fetched, the fact that chili peppers can positively influence weight loss is becoming a widely accepted fact in the health world.

And, since peppers can be added to almost any meal, those who find their current dietary routine bland and tasteless can use this information as a way to spice up their meals.

Researchers have announced that chili peppers can actually help people slim down faster. Chili peppers have long been used to add an extra kick in dishes and recipes throughout the world, but now they’ve been proven to have another benefit.

These peppers are filled with capsaicin, which helps the body burn fat faster and more efficiently. It creates a type of thermogenesis, which is when the body heats up to burn things.

This then burns fat faster than if the dish or meal had not included the chili peppers.

This results in people eating smaller meals, which helps shrink the fat tissues. As these tissues grow smaller and smaller, the fat that’s been stored in the body is burned. Over time, this can result in increased weight loss.

Chili peppers aren’t just good for burning through fat, they also have a lasting influence on the metabolism. In many studies, the effect of capsaicin on the metabolism was thoroughly studied.

Because capsaicin heats up the body, it works to jumpstart the metabolism. Due to the fact that a persons’ metabolism plays such a huge role in burning or hoarding fat, having one that is working optimally will help weight loss efforts show sooner.

In fact, the metabolism is often to blame for many weight gain issues, which is why more people should be informed about chili peppers and their weight loss abilities.

By using capsaicin as a thermogenic ingredient, the metabolism can become up to 5% more effective. In addition to this, it will increase how well fat is burned by the body by about 16%.

However, as with everything, there needs to be a balance when adding chili peppers to foods and dishes. If it is eaten too frequently or there is too much of it in a dish, it can damage taste buds. And, some believe that the nerve fibers that peppers numb can become permanently impaired.

If you are one of those who can’t stand the hotness of chili peppers, you can still get the weight loss benefits by using a dietary supplement that contains capsaicin (chili extract).

One of such supplements is Phen375 – Click here to read our  full Phen375 review.