Home » Weight Loss Articles » How MSG can Ruin Your Weight Loss Resolution
This post may contain affiliate links. I may be compensated if you make a purchase through a link on this page.

Known scientifically as monosodium glutamate, MSG is a food additive most commonly associated with Chinese takeout. 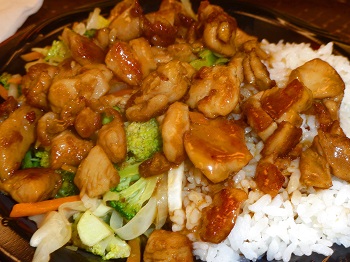 However, MSG is found in more than a few food products, being a flavor enhancer in noodles, potato chips, certain breads, and even canned soups.

While this wasn’t thought of as a problem for a very long time, researchers and scientists are now finding all sorts of issues that seem to be linked with MSG.

MSG is known as something called an excitotoxin, meaning it excites the cells in the body into overproducing the hormone leptin.

While this might not seem like an issue at first glance, leptin is actually the hormone that regulates the metabolism and appetite.

A recent study found that the more MSG a person ate, the more resistant his or her body became to leptin, making the body produce more of the hormone than it needed. This has been tied to extreme weight gain.

A study done in Spain in 2005 examined rats who were fed MSG continuously for a certain amount of time.

At the end of the study, it was found that the rats who had MSG added to their food had an increased appetite of 40%, leading many of these rats to become obese.

Despite the findings in this study, however, the facts that MSG have long been overlooked and is still being put in foods is worrying.

One of the more interesting things about MSG is that it is now being tied to causing weight gain and obesity even when there is no increase in food intake.

Even when the calories a person has eaten are all accounted for, there is a direct tie to MSG and weight gain. This is extremely troublesome, especially since MSG is one of the most widely used flavor enhancer in the world.

MSG hasn’t just been tied to the problems it causes with weight. Many people who eat even a little bit of it often say that they get headaches or migraines when they ingest this chemical.

What’s interesting about this fact is that in the United States, the amount of MSG consumed is minimal, about half a gram daily.

However, in many Asian countries, like Japan, the average person is eating about 1.5 to 10 grams of MSG a day.

Because obesity isn’t as big an issue in Asia as it is in the United States, those who are in support of MSG are claiming that these numbers are proof that MSG does not, in fact, cause obesity.

The American Journal of Clinical Nutrition published a research that looked at the effects of MSG on Chinese adults over the course of about five years.

At the end of the study, it was found that the risk of obesity rose about 33% in those who ate the most MSG.

These numbers indicate that this chemical does affect those in Asian countries, but there are other factors that help reduce their weight.

Most believe that because Asians are more active, they counteract the obesity causing factors tied to MSG.

The biggest problem with MSG, especially for those who are trying to avoid it, is that it can be hard to figure out what products contain it.

While before it was simply referred to as MSG on packaging, the food industry is getting more cunning about what it calls the chemical.

It can be referred to on packaging as anything from whey protein to gelatin and glutamite. However, no matter what it’s called, MSG is still a huge issue and it could seriously hinder any weight loss goals.