Home » Weight Loss Articles » 8 Ways to Prevent Holiday Weight Gain
This post may contain affiliate links. I may be compensated if you make a purchase through a link on this page.

Everyone looks forward to the Christmas holiday season, whether it’s for the festivities, general mood of merriment, or the excuse to spend time with family and friends. 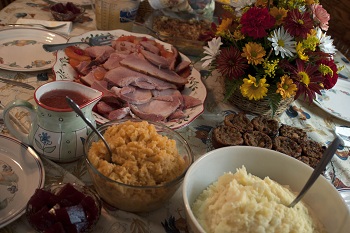 For some reason, when the weather gets cold and the Christmas approaches, with all the parties and get-togethers, people eat.

No matter how strong they stay throughout the year and how committed they are to losing weight, the Christmas holidays are like a huge pit filled with cookies, cakes, and alcohol.

However, for those trying to stick with their diet to prevent gaining weight or even lose more weight during the holidays, there’s hope.

There are several things that can be done every year to keep the weight off during the holidays.

And, when everyone else comes out of the winter haze ten pounds heavier, those who followed these tips will be glad they did!

1. Eat Before the Party

While it seems like obvious advice, this little piece of wisdom is often forgotten. Going to a party hungry is like asking to gain weight. Even the most disciplined dieter can give in to temptations when hungry.

Before going to party, it’s better to eat something small first. A salad or protein shake, anything that fits your weight loss plan, but also fills you up.

This tip can be used in two ways. First, when at a party or meal, drinking water first can help fill the stomach, which will make you feel full faster.

This allows you to eat what you want, because you’ll eat a lot less. Secondly, for those unable to eat a meal before a party, drinking some water can help with hunger pains.

The feeling of hunger is often a sign of dehydration, so making sure it’s real hunger and not thirst can result in smaller meals and less snacking.

Going to a party to get free food is something that starts in college and, even though people grow up and don’t need free food, it’s a habit that doesn’t seem to die.

Instead of thinking of Christmas parties or get-togethers as a chance to get free food, you should think of them as chances to catch up with friends and family.

By focusing on the people at a holiday party, food and drink fades into the background, making it easier to refuse or limit the amount eaten.

Most people have been told at least once that they need to slow down when eating. And while this advice is usually aimed at young people, it’s just as true for adults.

Taking something small and nibbling on it instead of taking bites can help keep you in control. Also, this will allow you to be more in tune to when you’re full.

It’s the holidays and it’s cold outside. This is one of the hardest times of year to avoid weight gain or lose weight.

Instead of obsessing over failures, you should set realistic, long-term goals as well as smaller, achievable goals.

Instead of deciding to lose ten pounds in December, setting a weight loss goal for the next three months is better.

Then, the focus can be readjusted to the smaller things that can be done, like drinking more water or exercising a certain number of times a week.

Drastic changes can be exhausting and disappointing. Instead of making huge adjustments and changes, you should pick one or two things to change a week.

For example, deciding to cut bread out for the week is more achievable than deciding to only eat salads all week.

Some hosts or hostesses might get offended if guests bring their own dish, but many will be thankful for the help.

Instead of hoping that someone will bring a healthy snack option, you should take the initiative and bring your own.

Vegetable platters, pita and hummus, or even a low-fat dessert will allow you to eat and enjoy the party, without feeling guilty about breaking your diet.

Weight loss isn’t all misery and depression. And while it’s important to stick with a schedule and a routine, sometimes it’s okay to take a break.

For some, there’s a special meal with the family that they just don’t want to miss out on. For others, it might be a dessert that they haven’t had in years.

Whatever it is, taking a break now and then to enjoy food won’t throw a weight loss journey completely off track. As long as it’s done sensibly and only on occasions, there’s no harm in taking a break.

Cut yourself some slack, it is CHRISTMAS after all!